The Allure of Uva Province

The Province of UVA comprises to administrative Districts Namely “Badaula” & “Monaragala”. Badulla district has a total land of area of 2822 square kilometers while Monaragala district is far too larger than Badulla, having a land of area of 7215 square kilometers. Nature of terrain and vast stretches of forest land in these Districts account far that fact that UVA is one of the lesser developed province in Sri Lanka. The leeward side of the mountain, zone of UVA is replete with tea covered hills where one can find ideal health resorts such as Bandarawela, Haputale & Diyathalawa.  Uva province comes under the dry zone and receives heavy rain from late October to early Ferburary when the region comes under the North East monsoon. Uva province presents resplendent landscapes that would attract any nature lover.

Located on the eastern edge of the hill country the bustling modern town of Badulla, the capital of UVA Province and an important transport hub, you might pass through on the way between the hill country and the east coast. If you do stay overnight in Badulla, there are a couple of attractions to while away a few hours. Thought to be one of the oldest towns on the island, Badulla developed into a major center on the road between and Polonnaruwa and the south province, though the old town has vanished without a trace. The town thrived under the British, developing into a vibrant social center complete with racecourse and cricket club, though there’s almost nothing left to show from those days now, save the modest church of St Marks, a small and quaint Victorian structure which stands at the northern end of the town center. 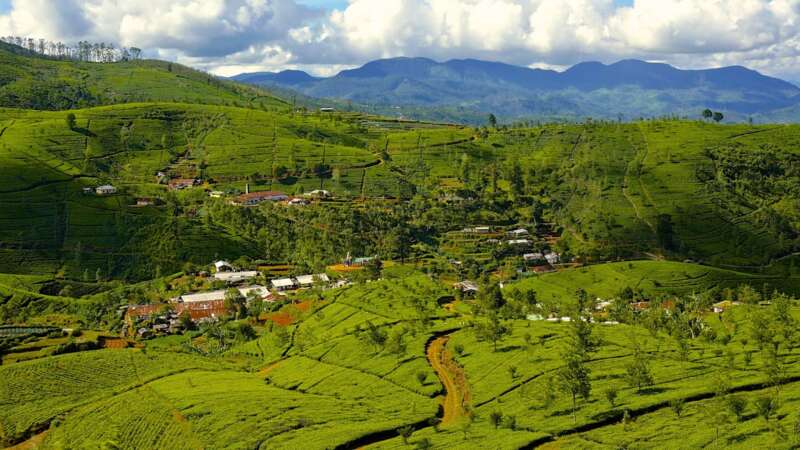 Places to visit in & around Badulla

At the southern end of the town stands “Muthiyangana Viharaya (Buddhist temple)” whose origins are believed to date back two thousands yeas to the reign  of Sri Lanka’s first Buddhist king “Devanampiyathissa” It’s a tranquil, if unremarkable, spot though you might get a sighting of the resident elephant in the grounds. The history of Muthiyangana Temple goes to the third arrival of “Lord Buddha”. Buddhists believe that Lord Gautama Buddha visited this site during his third visit to Sri Lanka and this temple is considered as one of “Solosmasthana”, the 16 sacred places in Sri Lanka.

There is another story says , some places in this area such as Seetha Kotuwa, Ravana Ella, Ravana Caves and Seetha Eliya refers to the powerful King “Ravana” who is in the famous Indian Epic Legend “Ramayana” 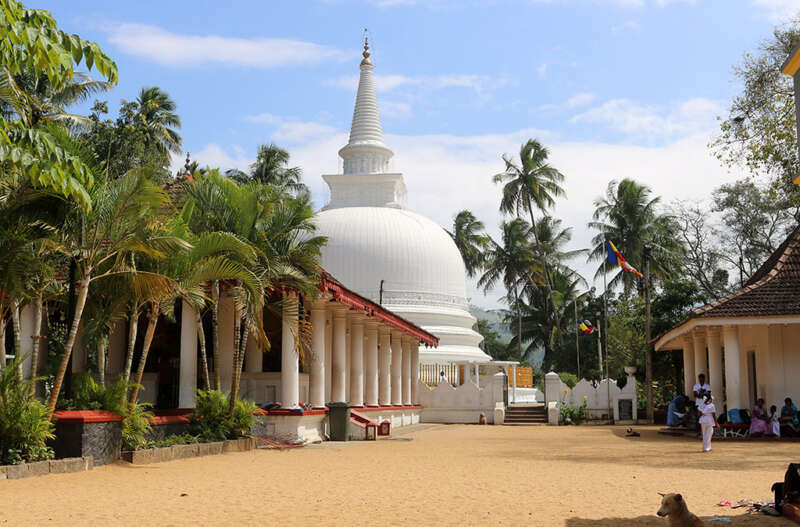 Scenic Dunhinda Fall is located in  5km away from Badulla Town. Dunhinda waterfall is 63 meters in height and it’s considered to be one of most scenic waterfalls in the country. The name of the Dunhinda falls come from its smoky dew drops spray and its known as “The Bridal Fall” because of the shape of the waterfall. Dunhinda waterfall is procured by the Badulu Oya (River) which flows across Badulla and the ideal time to visit this waterfall is from month of June to July. We strictly advice not to bathe in the water stream falling from the waterfall as it is very dangerous. 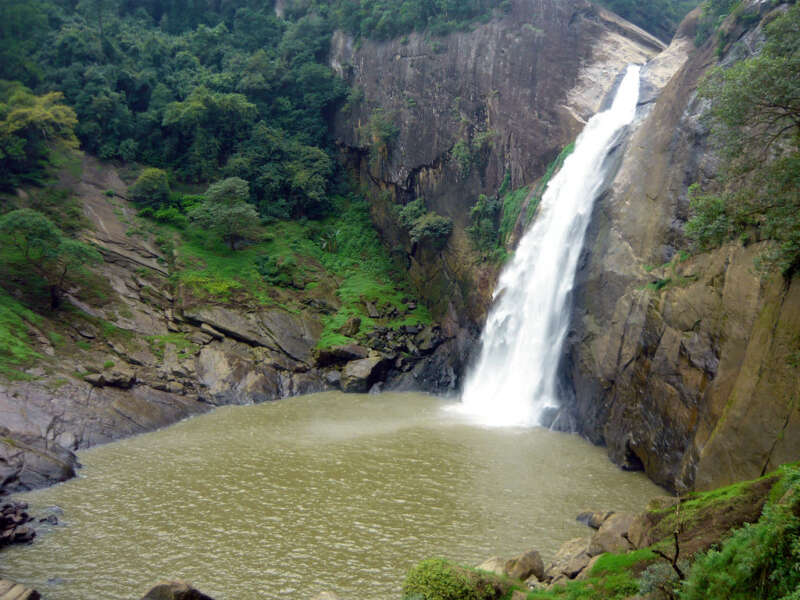 Bogoda Wooden Bridge is considered as the oldest wooden Bridge in Sri Lanka as well as considered by many experts to be the oldest still standing wooden bridge in the world.  Bogoda Wooden Birdge was built in the 16th Century during the “Dambadeniya” era. This bridge is located in 7kilometers (4.3miles) from Badulla Town. The bridge is over 400 years old and the whole bridge is completely made from wooden planks which are said to have come from one tree. The Kandyan style tiled roof is 2.4 (7.9ft) meters tall and its entire span of nearly 15 meters (49ft) length with a 1.5meters (4.9ft) breadth. The Kandy King “Keerthi Sri Rajasinghe” ordered the bridge to be built since crossing “Gallanda Oya” which linked  Badulla and Kandy on an ancient route and in the rainy season was both difficult and dangerous.  Later the king ordered to build a roof over the bridge. 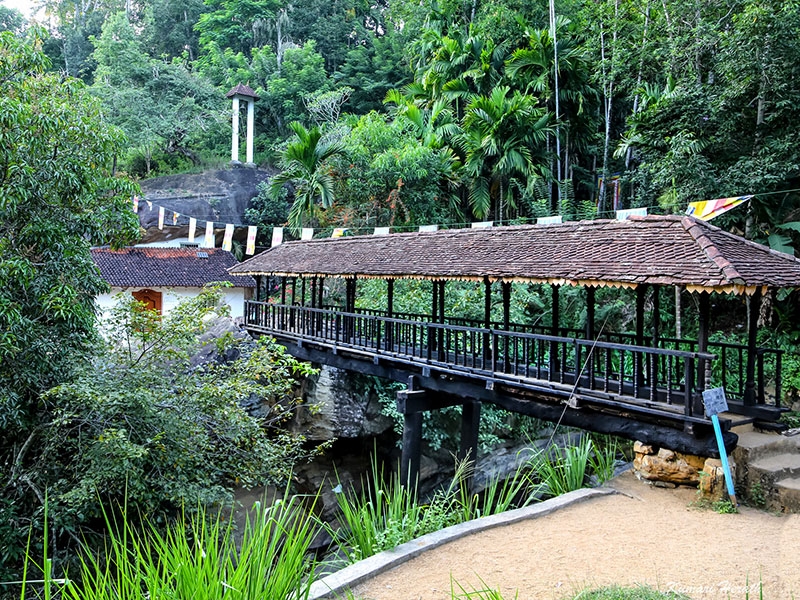 St Mark’s Church is an Anglican Church which is situated in the central division of Badulla Municipal council. This church was constructed on 25th of 1857 by Bishop James Chapman. In addition to the colonial era, British developed Badulla town adding horse course, gold grounds and tennis courts. St Mark’s church was erected by the public subscription in the memory of “Major Thomas William Rogers” (He was the government agent for Badulla) who killed approximately 1400 wild elephants which were in central highlands of Sri Lanka. Major Thomas Williams Rogers died on 07th of June 1845 struck by lightning at Sherwood Estate,  Haputale Town. 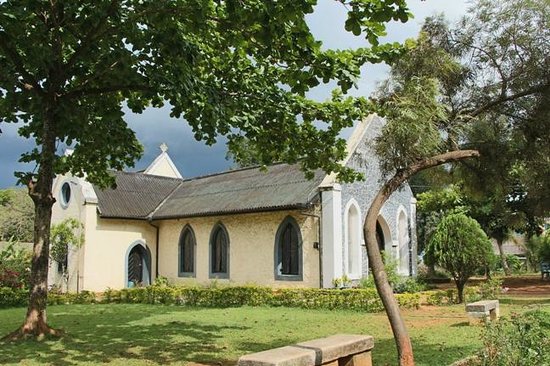 Ella is a very small town which in Badulla District and considered as one of most scenic town in Sri Lanka. Also Ella is a popular destination for tourists and local travelers. It is well known as “Paradise of Backpackers”. The Elevation of Ella is 1,041 Meters from the sea level and Ella town is surrounded by green mountains. You also can see lots of tea plantation in Ella and this area is rich of flora and fauna. The most popular attractions of Ella town are “Little Adams Peak Mountain”, “View from the Ella Gap”, Famous colonial “Nine Arches Bridge”, “Ella Rock”, Sri Lanka’s longest Zip line “Ravana Zip Line” and when you drive further down from the Ella town through Wellawaya highway, you can see the scenic “Ravana Waterfall” which is just fifteen minutes drive from Ella town. 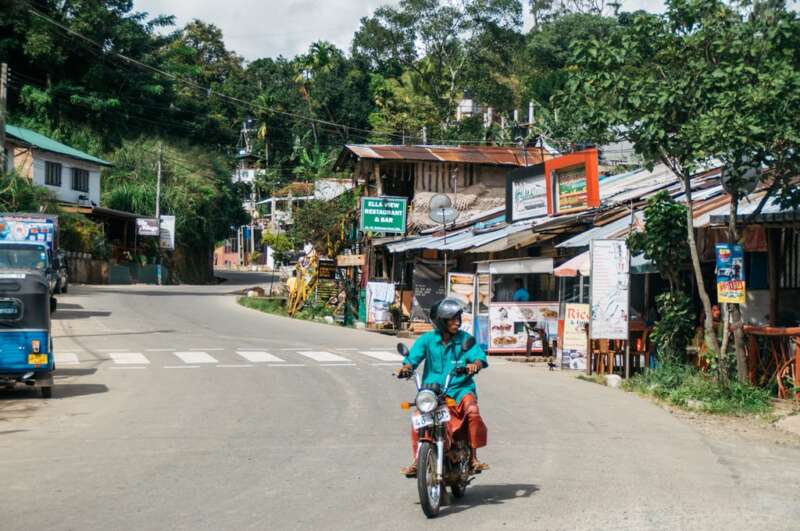 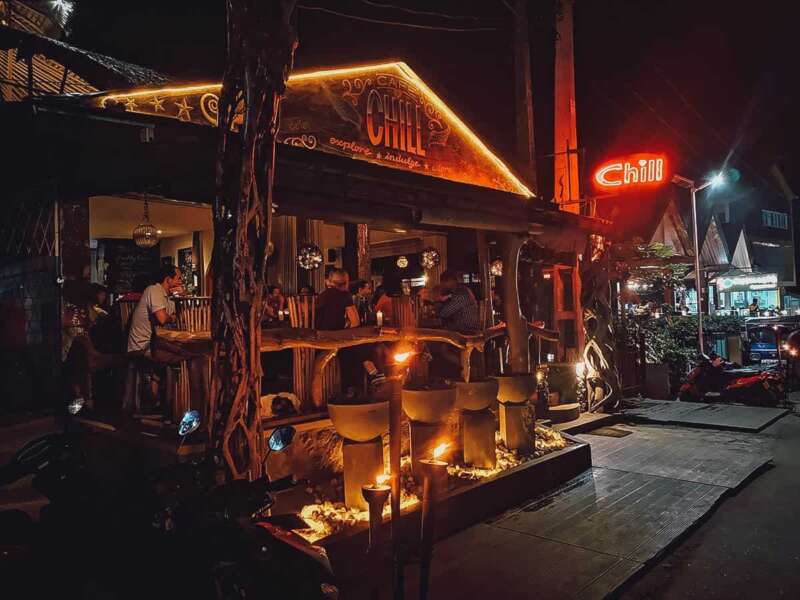 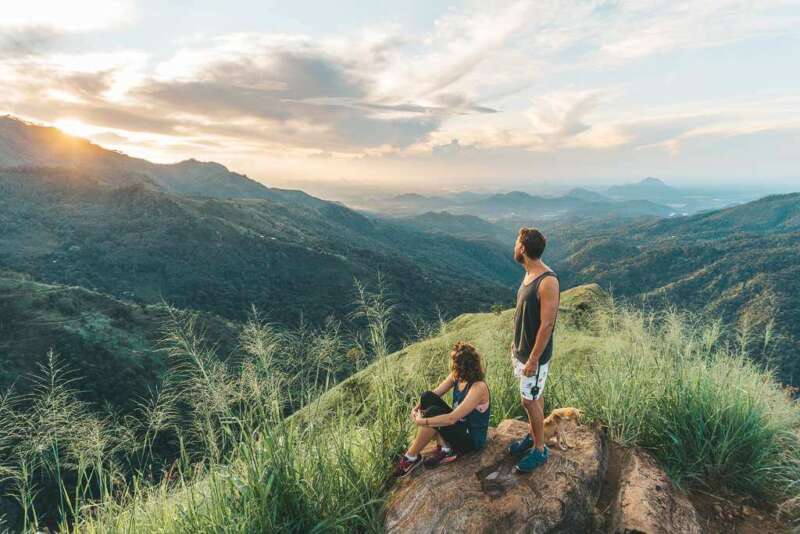 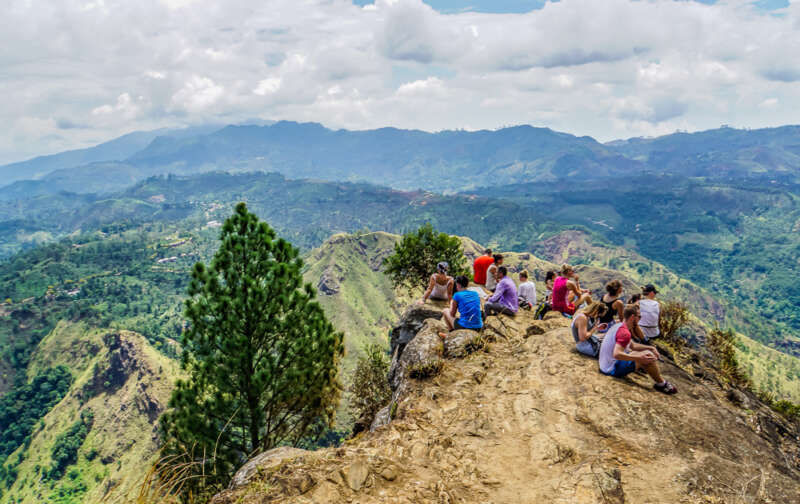 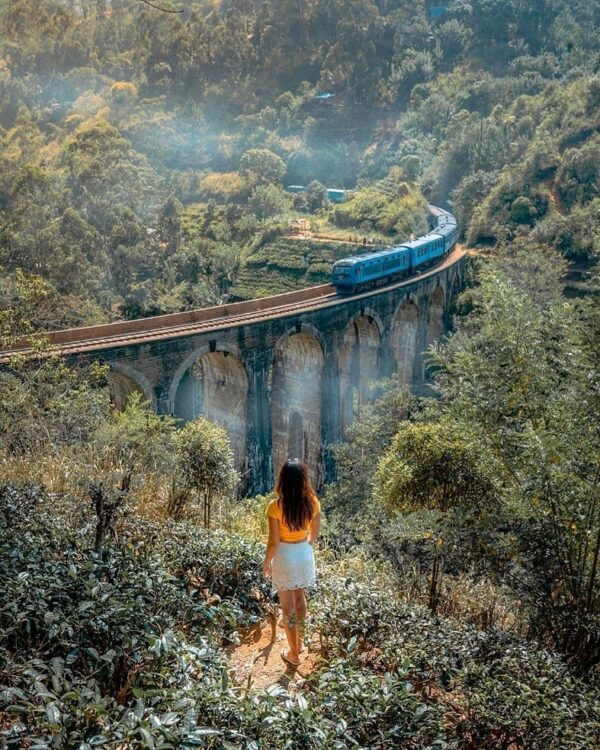 This town is the second largest town in Badulla district which is 30km away from Badulla city. Bandarawela is located on the western part of the UVA Province on the eastern slopes of central hills of Sri Lanka. Bandarawela town is located 200km away from the capital of Sri Lanka – Colombo. This town is surrounded with beautiful tea plantations which cultivated during the British Colonial era. Bandarawela is one of the major Ceylon tea production areas in Sri Lanka since Colonial times. 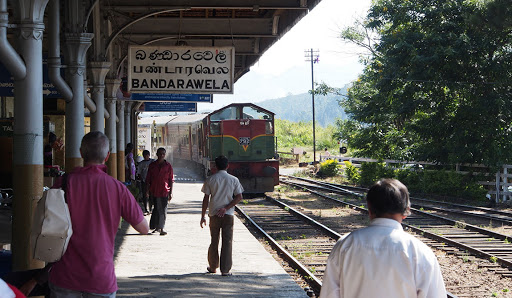 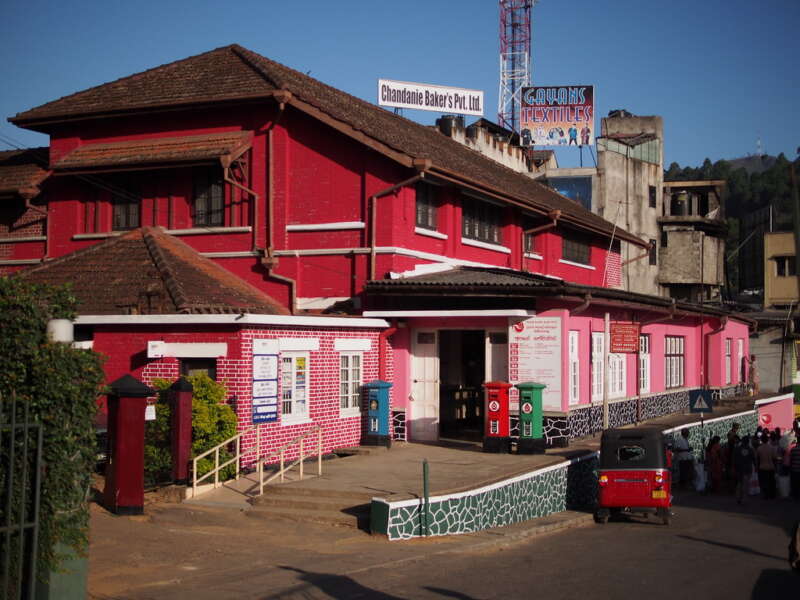 Places to visit in & around Bandarawela

Lipton’s Seat is a popular and one of breathtaking view points in Sri Lanka which is located in the hills of Poonagala. Lipton Seat is named after Sir Thomas Lipton , the famous Scottish baron and the tea planter who used it as the seat to survey his empire of tea. This stunning view point is located 1970 Meters above sea level in the Haputale Mountains overlooking the lush Dambatenna Tea estate. Lipton Seat is located 15km from Bandarawela Town and 18km from Haputale. The best time to visit Lipton’s Seat is before 10am as it may be cloudy and the point of Lipton’s Seat is reached by climbing for around 7km surrounded by carpeted green tea plantations and traditional colorful tea collectors.

Lipton’s Seat is a paradise for who wish for even more stunning view or photographers wishing to snap a picture of nature at its best. 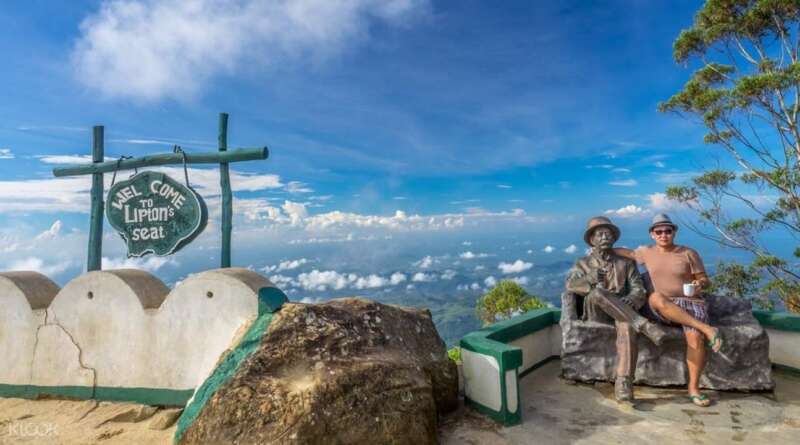 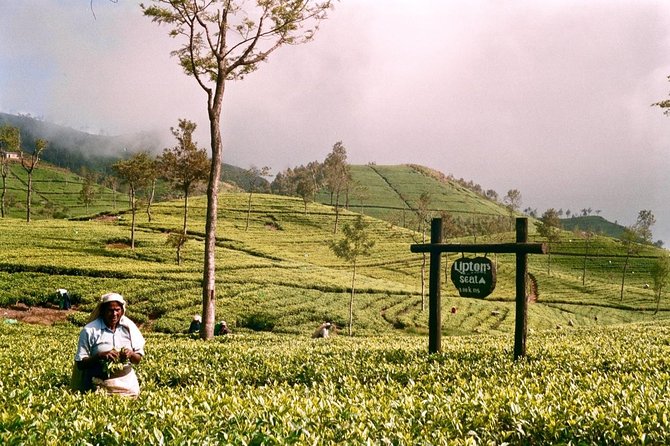 Dhowa Buddhist Temple is an ancient temple which is located on the Badulla- Bandarawella main road and this is a protected heritage site in Sri Lanka. According to the archeological surveys and details of ancient encryptions, Dhowa Temple is over 2000 years old which means the history of the temple extends before Christ.  In ancient time, this temple was well known as the Kumbaltissa Ariyagala Vehera named after the chief Buddhist monk of the temple who had offered sanctuary of the greatest King who was known as the “King of temples” – King Walagamba. The temple constructions was not completed during the reign of King Walagamba due to unsolved reasons and the temple was completed during the Kandyan Kingdom. 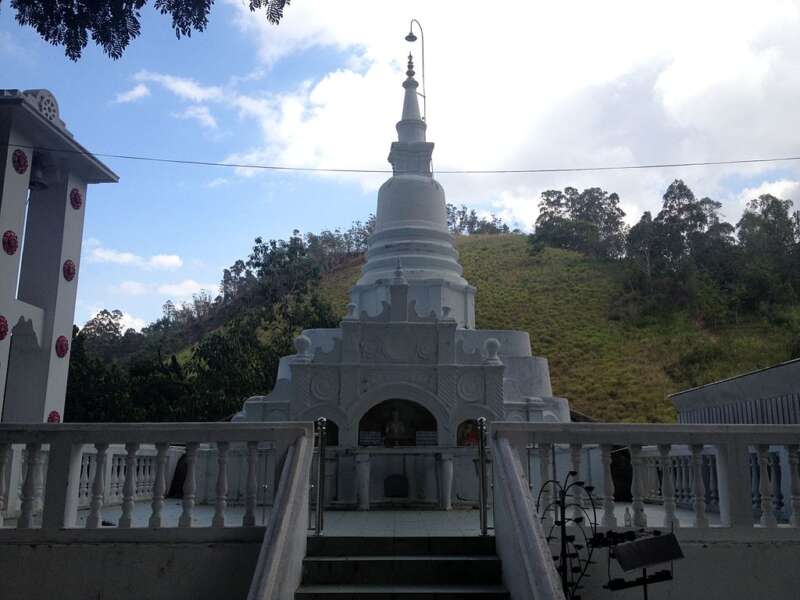 The main attraction of Dhowa Temple is the large unfinished “Buddha Image”, carved into the rock face which is belong to “Mahayana Sculpture Style”. This granite rock statue is 12Meters (39ft) in height and its in a state of ruin due to rapid decaying. 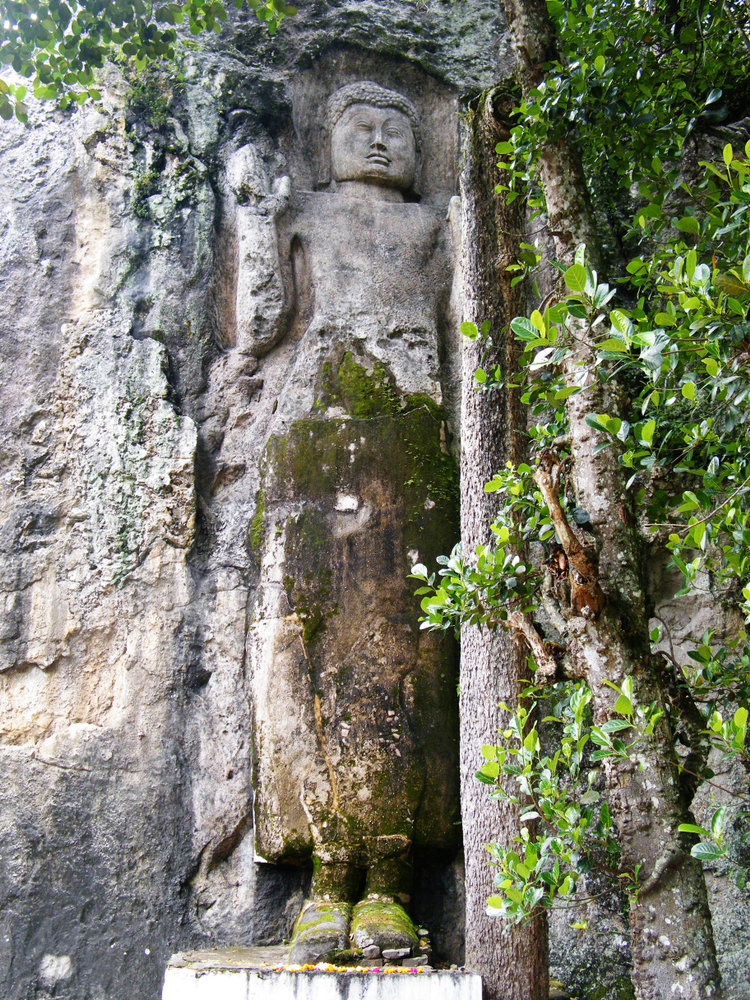 The other highlighted attraction of Dhowa Temple is its paintings. The shrine room of the temple is covered and decorated with the paintings which are belong to Kandyan Era and these paintings depict various stories of Jathakakatha (Stories of Buddha’s life). The granite roof of the shrine room is decorated with paintings of lotus flowers and different kind of other flowers. Among those paintings, the most special painting is the Ath-Gon satana (The fight between a tusker and a bull)

Paintings of the Shrine room at Dhowa Ancient Temple 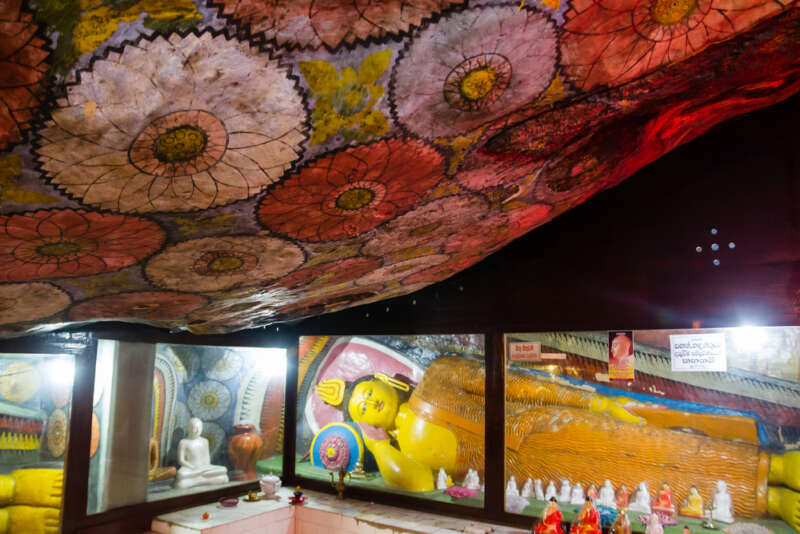 Dambatanne Tea factory is located  in Haputale mountain which 21.1km from Bandarawela Town . This colonial tea factory was built in 1890 by the guru of Ceylon Tea Sir Thomas Lipton. This is the place where Ceylon Tea was coined and  Lipton’s tea was found and sold its first pound of tea from the precincts of this very factory.

Dambatanne Tea factory is one of the few factories in Sri Lanka where you can experience a tea production tour and you can taste different kind of tea from their own outputs. 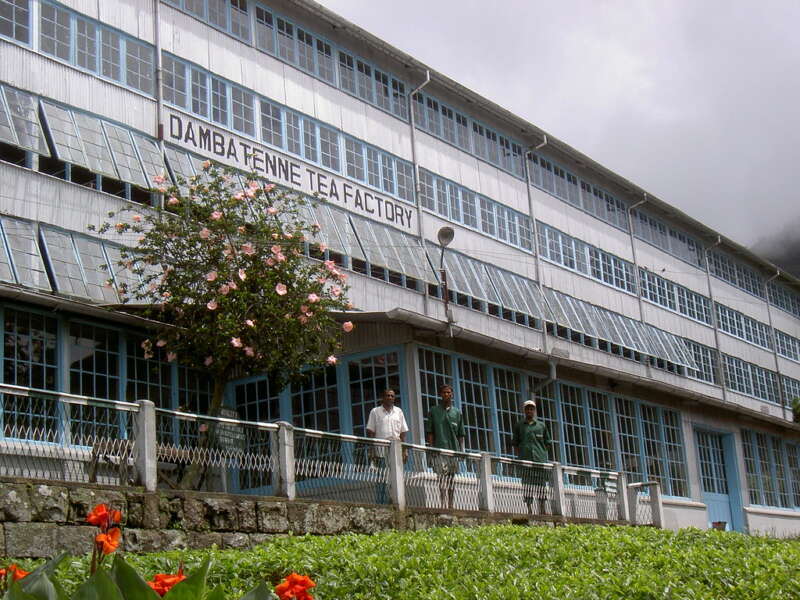 Adisham Bungalow or Adisham Hall is a country house which is located near Haputale, Badulla District. This colonial building was built in 1931 by an English aristocrat and a planter Sir Thomas Villiers. Currently Adisham Bungalow houses the Adisham Monastery of Saint Benedicts. A relic of St Sylvester has been enshrined at the chapel. This beautiful colonial building was designed by R.Booth and F.Webster in Tudor and Jacobean style. If you are interested in Architecture, we would like to recommend you to visit this colonial building during your holiday in Sri Lanka. 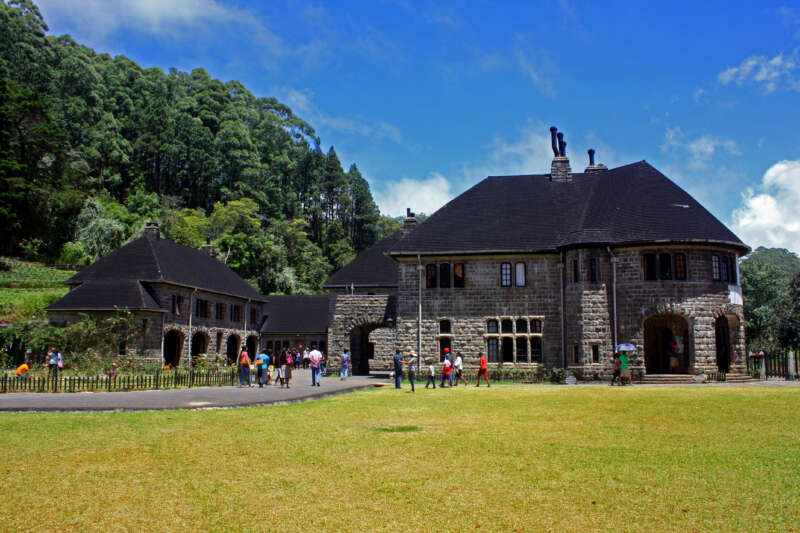 June 28, 2022
Ayurveda in Sri Lanka- Heal Your Body, Mind & the Soul What is Ayurveda? The concept of Ayurveda is old…

February 27, 2022
Mihintale- The Cradle of Sri Lankan Buddhist Civilization Sri Lanka is one of a prominent Buddhist countries in the world…

Sri Lanka has been ranked as the fourth best Wellness Tourism Destinations in the world for 2021!

December 11, 2021
The Global Wellness Institute has ranked Sri Lanka as the leading destination for Spiritual Healing! Sri Lanka is truly an…